Called “a fleeting and haunting lament for what is lost to gentrification, and other tolls on Black life in America,” Residue (Merawi Gerima, 2020, 90 minutes) tells the story of a man returning to his old stomping grounds and explores his relationship to the spaces he left behind. Released by Ava DuVernay’s independent film collective, Array, this intimate debut film from Chicago-based director Merawi Gerima contains echoes of the filmmaker’s past. Gerima’s father is Haile Gerima, the director of Bush Mama and Sankofa, who collaborated in the late 1960s with fellow Black UCLA graduates like Charles Burnett and Julie Dash. There are traces of Burnett’s Killer of Sheep in Residue as well as Spike Lee’s Do the Right Thing.

This event will include a screening of Residue and a curated selection from the South Side Home Movie Project organized to spur a comparative conversation about the idea of the “Black City” and its transformations. Thinking across Washington, DC, and Chicago as well as other sites, the panelists will consider the built environments, modes of sociality, and aesthetic and political practices that constitute Black urban space. They will also take up the transformations of the “Black City” in the wake of mass incarceration and urban redevelopment. 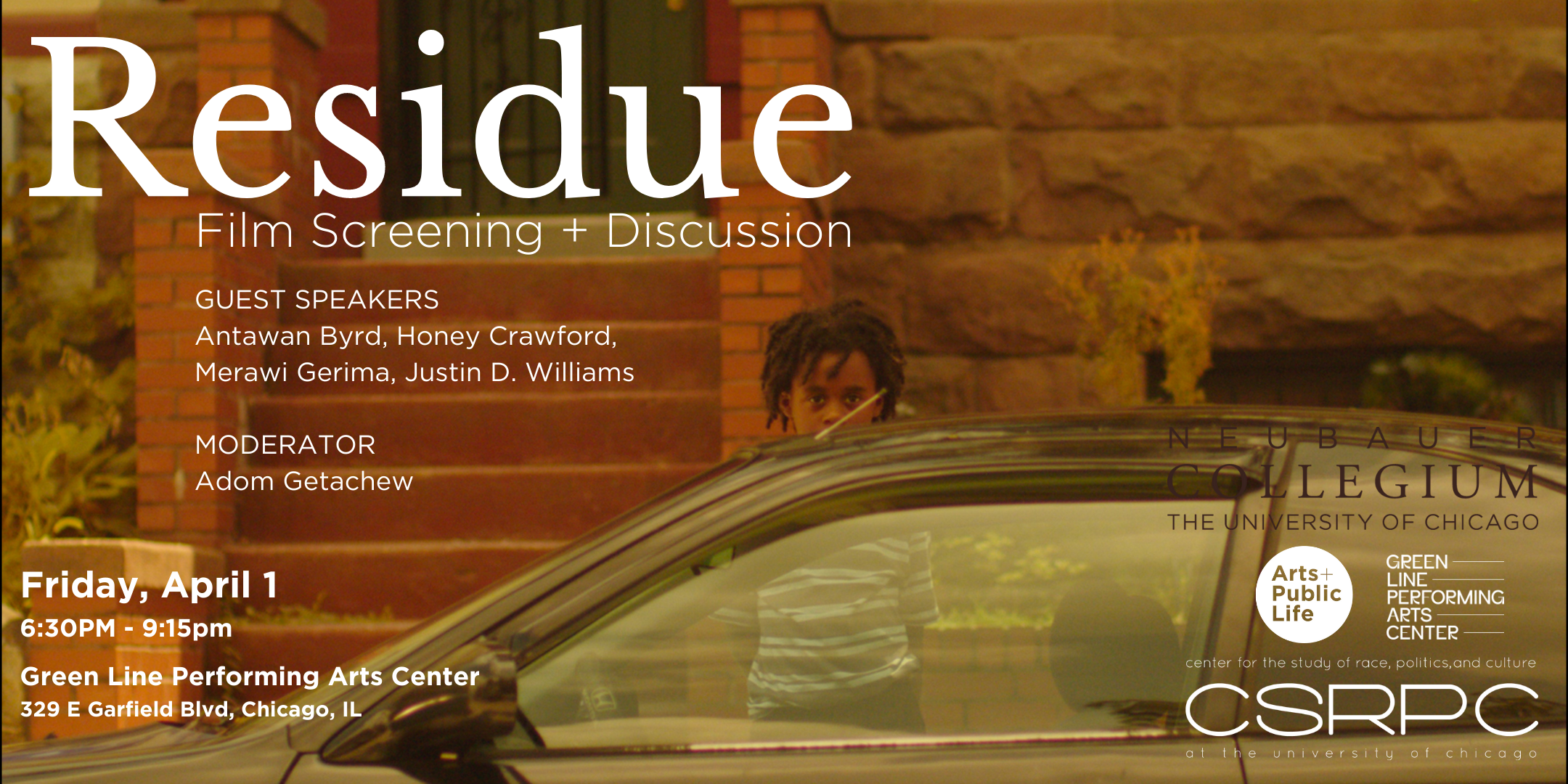 Antawan Byrd is the Weinberg Fellow in Art History at Northwestern University and Associate Curator of Photography and Media at the Art Institute of Chicago. He specializes in modern and contemporary art of Africa and the African diaspora with a particular focus on histories of photography, sound, urbanism, and popular culture.

Honey Crawford is Harper-Schmidt Fellow and Collegiate Assistant Professor in Theater and Performance Studies at the University of Chicago. She specializes in Afro Brazilian cultural performance as both a scholar and practitioner, exploring intersections between ritual performance and self-making through a repertoire that includes carnival, media activism, radical theater, and the performance of everyday life.

Merawi Gerima is a filmmaker from Washington, DC. This origin informs his work and his community-centered orientation. Residue, his first feature, was a communal endeavor, made possible primarily by the effort of the people it attempts to portray.

Adom Getachew (moderator) is Assistant Professor of Political Science at the University of Chicago. Her research interests include theories of race and empire, global Black political thought, and postcolonial political theory.

Justin D. Williams is the Project Manager and Archivist at the South Side Home Movie Project. He is a facilitator of multimedia projects that study personal and communal narratives in order to preserve and elevate their importance in our society. His broad background in arts and culture spans media technology, program management, documentary production, archiving, and community engagement.