4.29.2021: “Welcomed In: On Watching and Preserving Home Movies” essay in Pioneer Works

Written by Mary Thompson on 04.29.2021
for Pioneer Works’ Broadcast Series 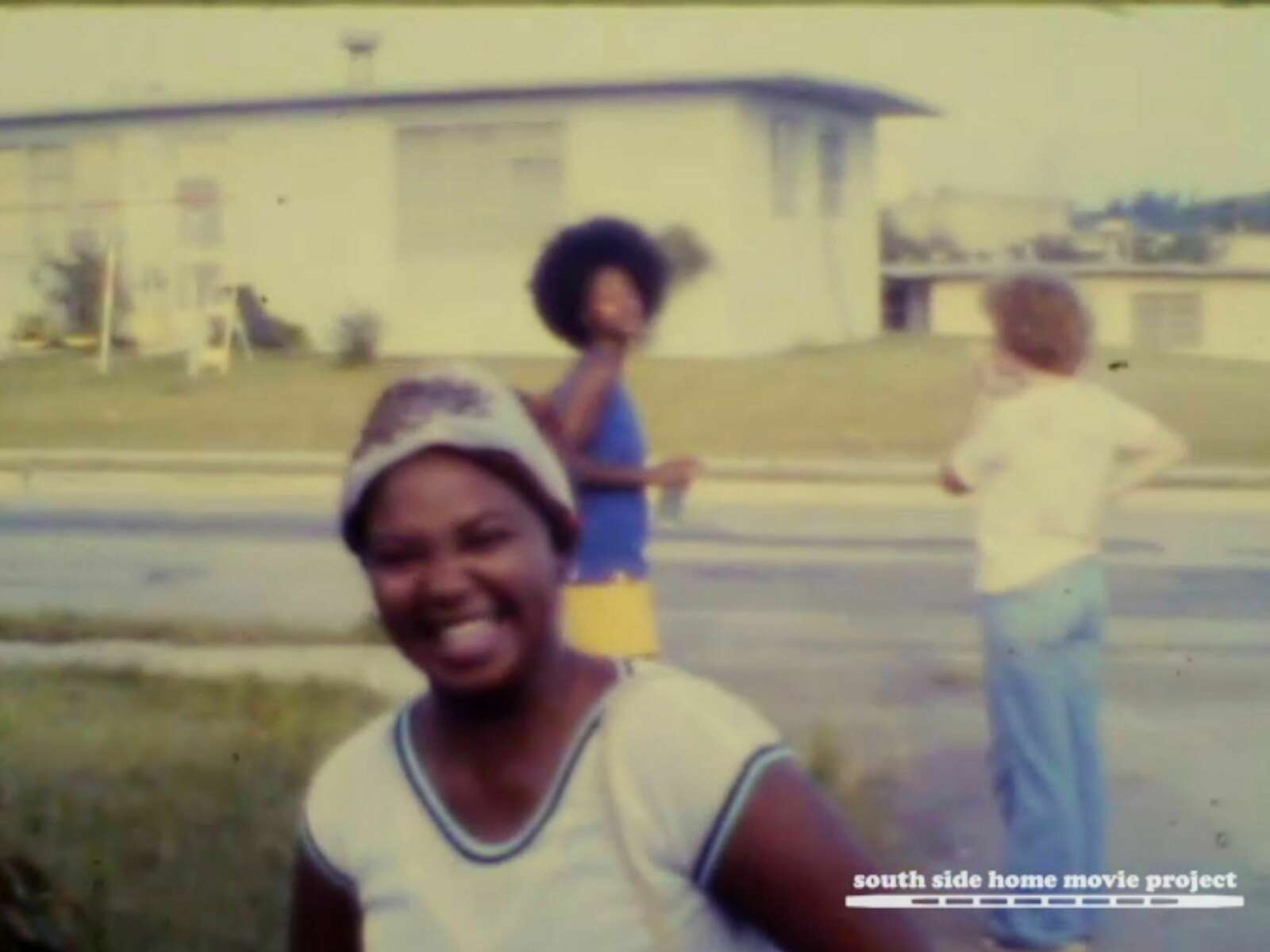 The Buford family in Okinawa, Japan, ca. 1976, in a film still from the Buford Family Collection.

There’s that line from Jonas Mekas: “I make home movies, therefore I live.” For many home movie makers, enthusiasts, collectors, and preservationists, these films, their films, are a testament to a life or lives, memory and memories, past or of a past, a proof of life, a reason to hit record, and a reason to store for future generations. Home movies are memory technologies, key moments caught by the amateur videographer, slices of life, and real people in their real lives, preserved forever. As physical media dwindles, how do we keep material that wasn’t necessarily created to be public, like the home movie, alive? And why would we want to? What does it mean to make a personal memory permanent and public?

I am not sure why I’m interested in home movies. My family never made any. I can’t remember ever watching the home movies of friends or relatives. Apart from America’s Funniest Home Videos, I’ve really only ever experienced them as they appear in feature films, in which they’re often depicted not as domestic, but as extraordinary. Hollywood regularly uses home movies to illustrate the beginning of the apocalypse or a scene of scifi horror (Signs, Paranormal Activity, the entirety of the found footage genre). Their use lies in the absurdity of something so familial, so boring and mundane, capturing the catastrophic and unbelievable. In a feature film, there is something unfathomably shocking about seeing horror unfold in such an ordinary format. And yet, we know that home movies have caught history unfolding from our own porch steps, which is why they have always struck me as mysterious: even when imagined as fiction, they are notes about an obligation we may feel, the obligation to document—document everything, what happens around us, and everything we see. They contain the power of discovery.

The cultural interest to preserve, document, and share home movies has increased over the last several years, and particularly so during the pandemic, though the medium has long had its stalwart champions. In 2019, MoMA presented Personal Lives Public Spaces, an exhibition on the form. When COVID-19 forced public institutions to close their doors, MoMA brought back Personal Lives Public Spaces to live online as their first virtual exhibition. The Center for Home Movies (CHM), which has been a resource for cultural, historical and educational institutions interested in the medium for over 10 years, helped people and organizations across the country go virtual for the annual Home Movie Day, a new challenge for the mostly analog-based format. From national organizations like CHM and the Memory Lab Network to community-based archives like the South Side Home Movie Project in Chicago and the Texas Archive of Moving Image in Austin, the last twenty years has seen an uptick in groups that archive home movies and teach families to be their own archivists: how to care for, preserve, digitize, and share their own videos. They share a belief that the communities in which home movies were created should act as their caregivers and stewards, rather than an institution that removes them from their contexts. For an archival project, the pandemic shutdown doesn’t initially seem like so much of a detriment. Inconvenient, yes, but not so catastrophic as it has been for many public-facing and -serving organizations. But how does that relationship change when an archive has an ethos not to collect and store, but to preserve and share, not to the public, but with the public? CHM and South Side Home Movie Project have had to answer that question.

Sabrina Craig, Assistant Director, External Engagement Programs at South Side Home Movie Project, explains how their collection functions: “This isn’t an archive that wants to gather up materials and hide them away, but the reverse. We want to find these materials and then make them readily available as a way to share the incredible riches that come from this community back to the community.”

This ties into how their events function, too. Pre-COVID, South Side Home Movie Project regularly hosted film screenings at libraries and community centers. Craig continues, “We tried to replicate what the original experience of sharing these home movies was like. It was in someone’s living room or basement on a screen that they set up. Lights up. People are talking. There is music playing. There is food. There’s different generations of people and it is a very social experience. It is not a typical go sit in a theater, lights go down, everyone sits quietly and watches the story unfold. This is a lively, warm social experience so our events were in keeping with that idea….”.

While we couldn’t meet in person, South Side Home Movie Project took to hosting Spinning Home Movies, a virtual event that invited artists, musicians, and DJs to explore South Side’s archive, select clips, and create a score based on their selections. Afterwards, donors of family collections, archivists, and the artist discussed the clips together as they replayed. It was an act that makes the internet a little more like home. Based on their popularity, people feel welcomed inside.

For these archives and organizations, it is the welcoming that seems to be the goal. Filmmaker and board member at the Center for Home Movies, Kate Dollenmayer, notes, “People have started to recognize the importance of home movies, but there are still tons out there [that haven’t been preserved], especially in communities with fewer resources or less access to larger archives. That is the focus of our outreach.”

And both organizations encourage us to keep preserving. Perhaps we don’t record on film anymore, but everyone makes home movies these days. Their cell phone camera is flipped; they record their thoughts for the day and history that surrounds them. What memories does it capture for future generations? What might they see when they look back at these videos, at these small moments of day-to-day life?

There is something disingenuous about this entire line of thought. I see into people’s homes all the time. Too much, to be honest. I watch house tours on Instagram and Youtube, a dinner shared by close friends on their feed, a video of someone’s morning. These views are crafted with a public in mind. The special part of home movies is that they aren’t crafted, well, for me. They’re crafted for family, for a small group of friends, for the people themselves recording. When shared with the public, we gain a sort of intimate knowledge that we could never touch otherwise. Set against a grainy film, it’s more than enough to make one nostalgic—even if the memories aren’t your own. In a home movie, the outsider view is an interloper, detective, spy, historian, guessing at what once was and what might be. Yet, when watching one, you still feel welcomed like a friend, as if you were supposed to be there. The audience becomes the subject, not just the viewer.

I think about Nelson Sullivan, who tread a middle ground between proto-social media and home movie in which artifice and authenticity (or whatever those really mean) are linked. An artist living in downtown New York during the 1980s, Sullivan was somewhere between a home movie amateur and Warhol. Sullivan recorded daily: his walks around town, his meeting up with friends, sitting in Central Park, in a bar, at the club. His deadpan narration tips us off that this is more than just an attempt at documentation, but an attempt at capturing, of emoting, of creating something from an ordinary day. Nelson is a character in his movies, but he is also just Nelson. He recorded his last film just hours before his sudden death, from a heart attack, in 1989. You walk with him—we walk down to the Chelsea piers, then back to his home, we meet his friend, he prepares for a barbeque.

We have access, luckily, to all of Nelson’s tapes through the 5 Ninth Avenue Project, a Youtube account run by Dick Richards and Robert Coddington, that shares those tapes with the public and to NYU’s Downtown Archive collection, which has ensured preservation for the project. With Nelson, I venture through New York streets that are similar to the ones I know and yet so different that they’re almost uncanny. Nelson tells us what he is thinking, what he has to do this day, narrates what he sees. The videos are boring. They are mesmerizing.

Even now, Sullivan’s fans retrace his steps. They arrive at his apartment, now a gallery. The door that we see so often in his videos is still there, which is remarkable, really, for Chelsea. They take videos on his stoop, note that the vines he planted are still growing, spreading ivy up the wall outside. They upload these retracings to Youtube. On the other side, I watch their updates dutifully. I’ve learned more about the shape of my gaze and role of the audience in Nelson’s films than in watching anything else.

Artist Marc Camille Chaimowicz who, while not a filmmaker, is also concerned with documenting the domestic, wrote on objects that keep memories: “In the exclusivity of sadness we recall lots that we may then forget… and thus be free to live our future.” A home movie is the ultimate memory object. To keep the past is not to be buried with it, but to look towards what might come next. And maybe what might come next is what maybe already was, like film on double exposure. Dollenmayer finds that it is these rare accidents that can be the most special. She told me, “I am a big fan of accidental double exposures… It would happen a lot with 16 mm film because… when you finish [the film roll], it’s not necessarily obvious, and it is easy to accidentally take a film roll you’ve already shot and put it back in the camera and expose it again upside down and backwards. Those can sometimes be really beautiful.”

All home movies, in their own way, are beautiful. Even if they are boring, especially if they are plain. “Among home movie enthusiasts, there is an unspoken shorthand of what makes a good home movie, but a lot of people would hesitate to say that there is such a thing as a bad home movie,” Dollenmayer explains. Personally, I like home movies without anyone in them the best. Videos that trace over empty spaces: a new home, a kitchen not in use, a desert landscape on a road trip, a school or mall—abandoned. If home movies are usually ghost stories or physical, partially present memories, these ones are hauntings, out of time. They belong to the past and invite a future. You could inhabit these spaces too, they seem to say. It’s that feeling that you know this place, that you’ve walked through these rooms a thousand times, even though you’ve never been there before. The difference in a home video, more than any other art, is not that you can inhabit it, but that it welcomes you in, without reservation or qualification.

Consider this clip of Jean Patton, whose collection of over 100 reels of home movies is part of the South Side Home Movie Project. Jean Patton is in her kitchen, likely filmed by her husband. The kitchen is bright yellow and she’s wearing tight, shiny gold pants. She’s smoking and playing solitaire, but looking at and talking to the camera, as if she’d started a new game, this time for two people, and would deal me in, if only I’d ask.